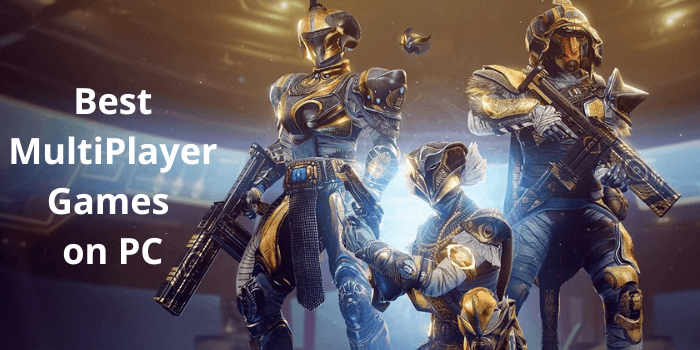 The search for multiplayer PC games has been increased when the lockdown hits all of us a sudden. During that time, people wanted to play online games at home with their friends and family crew. Even after things are getting back to normal, the search still continues.

So, if you are still searching for the best multiplayer games on PC in 2022 to play with your bunch of friends or neighbors, your search ends here.

In this blog post, I will list out some interesting yet best multiplayer games that you can try playing with your friends on your PC.

An online shooter game that grabs gamers’ attention in recent times. Destiny 2 can be played on PC with a group of friends. And so, I found the game to be the best multiplayer game to play with friends. Bungie.net is the official developer of the game.

The game is free to play. With some minimum PC specifications, you can smoothly run Destiny 2 on your PC. There are so many interesting scenarios you may face in the game while playing as you have to collect weapons and safeguard items by following some activities.

With weapons and all other similar wares, you have to battle with the enemies to finish each level of the game.

Almost similar to Destiny 2, WarZone is another shooter game that is available for gamers to download on PC and play with multiplayer.

WarZone is Call of Duty’s Battle Royal game which was launched in March 2020. Soon after the launch, the game grabs much attention, especially among shooter gamers.

In the WarZone game, the players can easily customize the guns with some available elements and war with the enemies through the customized guns to shoot with some extra power levels.

The game WarZone gets frequent new updates from the team and this is one reason the game gets so popular in a quick time.

Even after the decade passed, the craze for GTA online still remains the same among the fans of the game. It was first launched in 2013 which you can play on PS 3, Xbox, and PC as well.

People who were born in the 90s came across the game GTA online at least once in their life. You can set up anything you imagine in the game. That’s the beauty of the game. Rockstar North is the developer team behind the game.

Grand Theft Auto is one of the best multiplayer games on PC for the past 10 years. Even there are many Youtube channels out there to talk about the gaming techniques where players get so many ideas there to play GTA with friends.

A group of 10 players should survive in the game by following the levels given in the game. You along with your pals have to start out on the Valheim journey at a meadow and need to pass the location by beating the enemies.

You have to discover the crafting materials in the game along with your friends to collect the weapons and armours.

Valheim bosses are the enemies in the game, you just have to shoot out the bosses and move forward to up your levels in the game.

As the name itself suggests in the game title, you have to build Forts in the game. There are so many platforms that support the game Fortnite including PC. The platforms such as PC, PS4, PS5, Xbox One, Xbox Series X, Nintendo Switch, iOS, and Android.

Having some good architectural skills is a plus for players in the 100-player battle royale game as with the skills, you can create some quick forts in the game. Epic Games is the team of developers behind the highly played multiplayer PC game Fortnite.

New mechanics and new items are kept on adding to the game with every new update. So, the fans of Fortnite are always in good mood to know their what’s next with their favorite game.

One of the best on the list to play an action game for android with a gang of friends with all the fun. PUBG is not just a game, it’s an emotion for all gaming fans out there.

PUBG studios are the developer of the game that was launched back in 2017. The game grabs high attention when lockdown starts. Millions of players started installing the game on their phones and started playing with their friends.

The game is available on almost all popular platforms. You can play PUBG on PC as well with your friends.

There are some 100 players who drop onto an island and should search for the loot by battling with each other. The one who remains alive in the end will win the battle.

I have added the six best multiplayer games on PC in 2022 which are not just my personal favorites but also among many people who show interest in these games compared to other games.

My personal favorites in the list are of course PUBG and Destiny 2. If you ever tried any one of the above-listed games, feel free to share your favorite with us.

Also, if you know some other interesting yet best multiplayer games on PC, just share the names with us.

Get Your Ex Lover Back in Melbourne

There Are 9 Things You Need To Know...

How to Install PUBG Mobile on Your Samsung...

The Reason Gucci Is So Expensive Compared To...